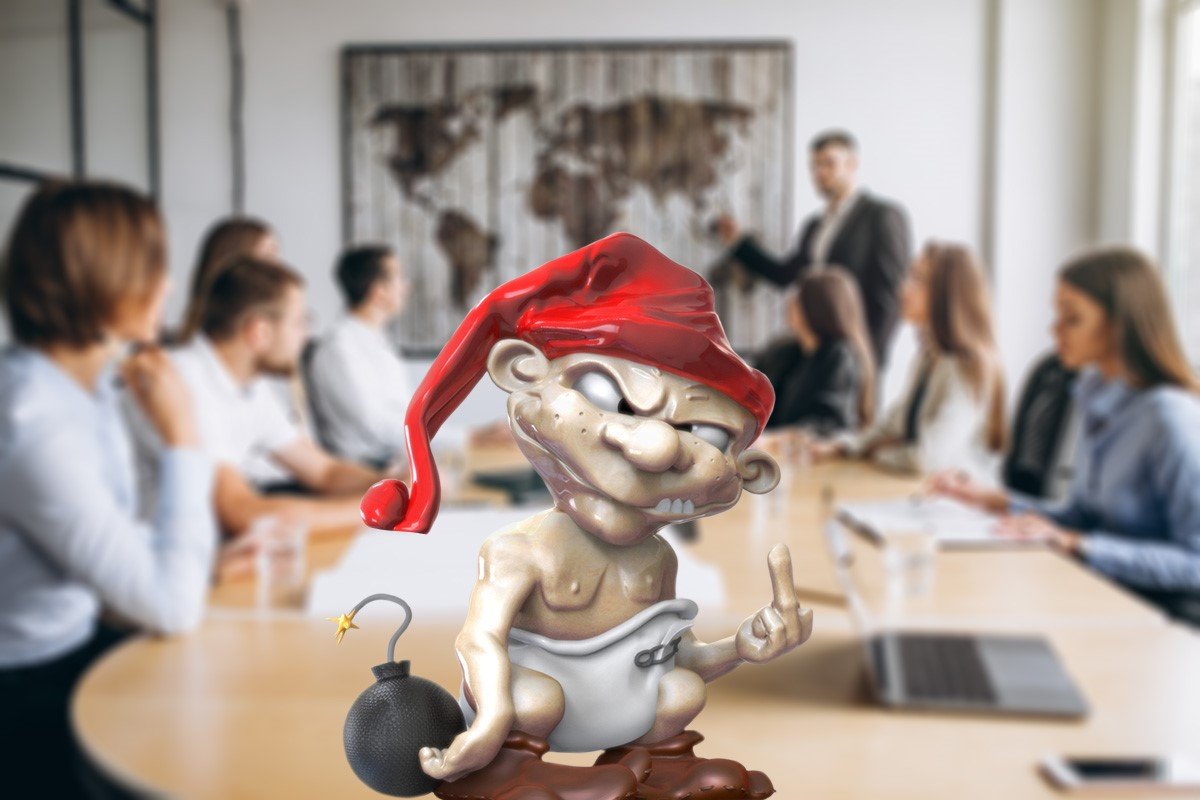 Management is facing investors, engaging directly in strategy and operations. The perception of Activist Shareholders is ambivalent. The impact on the company can vary from delivering higher returns but also causing significant inefficiencies. For the management, it is a thin line, how to answer to calls from shareholders, in order not to disconnect from its investors, but also not becoming subject to minority positions. Current research identifies five different typologies of investors. The blueprint for the common perception of a shareholder is the Rational Investor, a highly analytical, emotionally controlled, superhuman being, with a computer implanted in her brain, yet, being of moderate wealth and average financial sophistication. Whereas the Rational Investor is long-term oriented and passive in her behavior, Activist Investors show a different investment pattern.

Corporate raiders or advocates for best practice in management?!

In the public view, Activist Shareholders have earned the reputation of corporate raiders. Whereas Rational Investors are supposed to be long term oriented and act only passively, Activist Shareholders are known, to focus on short term gains, and to interact with the management of the firm, to influence the strategy, operations and also the decision-building processes of other investors. Yet, the role has more facets to it.

Different underlying strategies motivate investors, to interact with the management of a firm. Yet, the common driver is a disagreement with “the way, things are” and “an urge, to change the course of the firm”.

Activist shareholders pursue goals within or outside the frame of the general assembly, raising their voice “above their fair equity share.”

“Raising the voice in excess of the equity share” can include:

The role in the corporate environment

Active investors are perceived in an ambivalent way.

Particularly with the highly opportunistic transactions during the 1980s, earned the reputation of corporate raiders, by forcing companies on their preferred course of strategy or rid themselves of the activists through buyback campaigns at high premiums.

Activist investors describe their role as catalysts, unlocking value in the underlying assets. Hence, acting on behalf of all shareholders and increase corporate performance.

This claim is disputable.

Iconic names like Carl Icahn have given faces to this impression.

Research from 2017 of the University of Oxford reveals shareholder activism has noticeably shifted towards longer-term value creation, in recent years. This is defined as “engaged activism“, as differentiation to the short-term oriented “financial activism“.

Either group of activists intends to increase returns on their investments into the underlying assets. A third category includes non-for profit organisations deploying shareholder resolutions and other measures, to push for sustainability, human rights and other aspects of corporate social responsibility. Examples include the Interfaith Center on Corporate Responsibility (ICCR), As You Sow and Ceres (et al.).

Common sense is not so common. (Voltaire)

No matter the intention, activists cause a distraction to the management of a firm.

It is saved to say, a variety of thoughts and opinions can improve the strategy and execution of a firm. The general assumption is, activists, base their initiatives on informed decisions, comprehensive data, and command sufficient financial acumen.

A 2012 study from the U.S. Securities and Exchange Commission (SEC), regarding financial literacy among investors, concluded a “lack of financial sophistication, disabling investors to protect themselves from security fraud”. This does not hold for professional investors (e.g. asset/investment managers from funds, investment banks, private equity firms, family offices, etc.), whereas, retail investors are likely to show the only average or below-average financial acumen.

The situation is more complex for SME companies.

Whereas mature and sophisticated companies are able to negotiate with activist shareholders, dealing with activists is subject to a number of specific aspects in the mid-cap market:

(Note: SME companies, which are fully or substantially owned by the management are excluded here.)

“Over-“interaction of a dominant investor with executive management, can further potentially lead to eroding leadership. The executive management is depending on trust, guidance, encouragement, and support, to create a culture of success for mid-level managers. Distrust and distraction on the board level, are likely to spread through the entire organization over time, jeopardizing any winning team.  SME companies are poised to suffer from constraints in management and strategy. Additional know-how and diversity can help to improve the companies strategic capabilities, to foster growth and profitability. Essentially it does not matter if additional know-how is added by internal resources or by members of the shareholder community. As shareholders are often compensated only through dividends, this can be cheap access to additional skills and resources. However, shareholder contributions can be highly value-creating, but just as well, easily significantly value-destroying.

It is fair to say, activist shareholders keep boards and executives alert, and foster best practice in board- and executive management. As they exercise more intense oversight of management decisions and use of funds, this helps to hedge against Principal-Agent Conflicts.

Whereas it is generally a good thing, to keep management and boards on their toes, Activist Investors can also become a major risk by distracting management attention and consume significant resources, hence, cause limitations to management effectiveness and efficiency.

The good, the bad, the ugly – value creation vs. value destruction through activists

Intelligence & intention drive the role of Activist Shareholders for a firm.

In theory: All shareholders seek for value creation of the firm.

In reality, the intentions of shareholders can vary from the ideal model. Whereas strategic investors are assumed to act for the benefit of the collective asset, financial investors  are considered to be notorious for pursuing primarily individual goals.

Yet, best intentions without capability are dysfunctional.

“Never attribute to malice that which is adequately explained by stupidity.” (Hanlon’s Razor)

Whatever the intention, the capability of the individual defines the impact and the outcome of the Activist’s behavior.

A lack of capabilities falls into two elements:

Ineligible shareholder initiatives consume time and attention from the management. 84% of directors agree, activists often create a negative distraction for the management and the board.

These inefficiencies are limiting the chances for a firm to succeed, as attention for operational challenges is diluted. 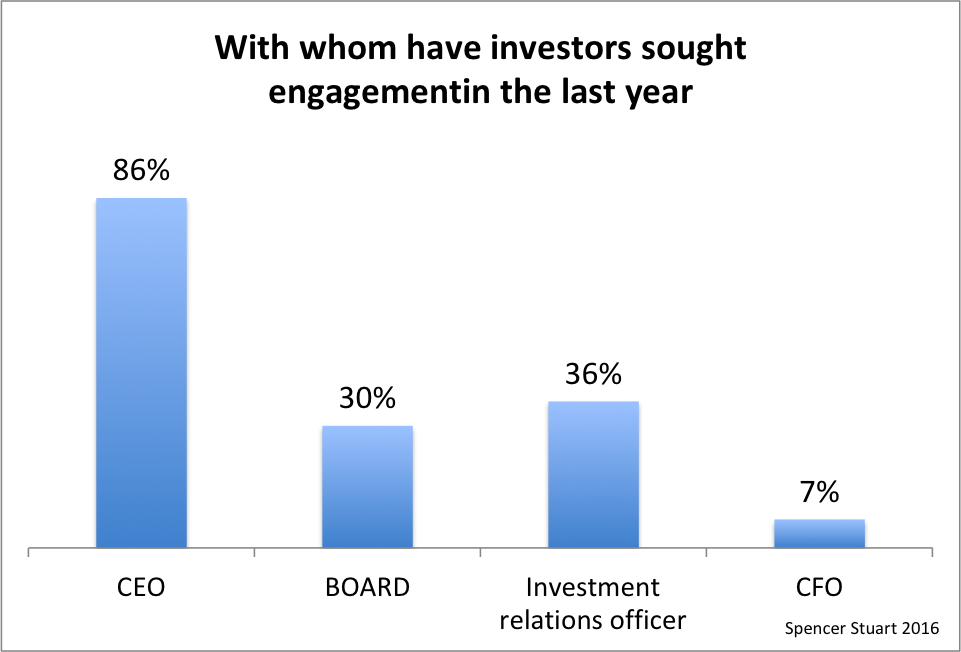 Activists are notorious, to focus on the CEO and the Board for interaction.

Dilution of the management’s attention can be reduced, through dedicated resources. Investor Relations Officers (IRO) can protect the CEO’s agenda from initiatives from Activists Shareholders.

The engagement of dedicated personnel for investor relations increases OPEX, hence, creates inefficiencies and is only available to more mature (and profitable) companies. This also underlines the importance of management-shareholder alignment, in small-cap firms and/or companies in “situations of rapid change” (turnaround, distress, aggressive growth at al.). For these companies, Investor Relations-resources are, very often, not available, whereas undiluted management attention is critical for success.

Accordingly, 86% of directors would not welcome an activist’s involvement with their company’s board.

The opposite of “good” is “meant well”.

Financial investors are observed, to cause additional risks for the management, by challenging executives on a personal level or imposing legal threads.

These patterns of behavior can lead to distraction of the management, securing their individual legal positions and focusing on liabilities rather than progressing the business (this is addressing cases of executives, who act in good faith, being subject to misguided shareholder activities).

Keeping the management on their toes.

Strategic investors are often considered to act in good faith and alignment with the management; Shareholder initiatives, seeking collective benefits, are likely to push the management for better performance and act as a catalyst. 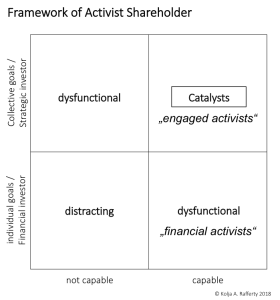 Yet, from outside, to conclude a thorough strategy, bringing this to action and overseeing the impact for the firm, is not possible without alignment with and buy-in from the management.

Whereas an engaged activist shares the holistic vision and the goals of the management and the shareholder community but maybe in disagreement, how to achieve those, a dysfunctional activist, is including only selective elements of the firm’s eco-system in her vision. This can apply to Selected assets, selected shareholders (herself), a selected part of the time horizon of the firm, etc.

Differentiating between the “good” and the “bad” activists comes down to two relevant criteria:

It is specifically difficult for an activist, to qualify for the second criterium, as the management is engaged deeply with all details of the firm, hence, by definition holds private knowledge.

Whereas it is easily said, and engaged activist is considered to challenge the strategy and/or the execution of the company, whereas elements, leading to value maximisation (say-on-pay) are in the focus of a financial activist, the underlying elements are more differentiated. Misalignment among shareholders may be caused by three major areas of conflict: 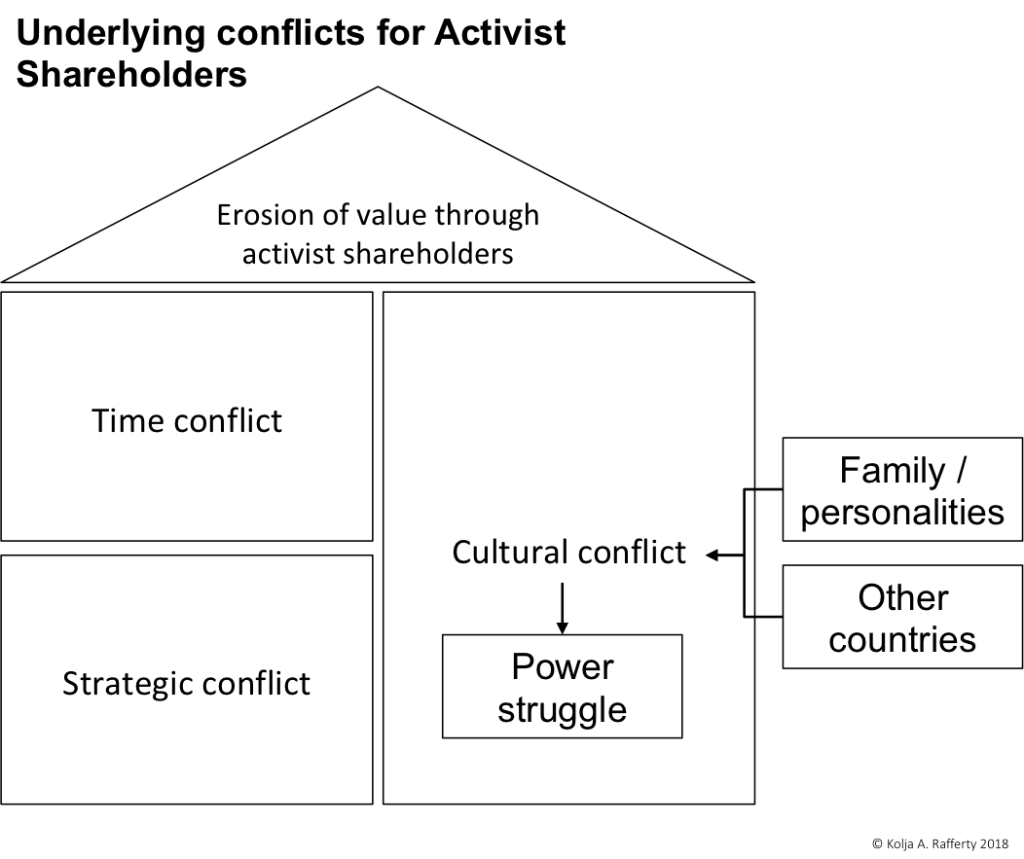 Different motivations can lead to activist behaviour. Among those only engaged activists are long term oriented and pursuing collective benefits. They are likely to create value for the company by hedging for principal-agent conflicts.

The short term gain focus f financial activists, is notorious to lead to inefficiencies and consuming and diluting management attention, hence, potentially decreasing progress and growth of a firm.

The Praetorian Guard, to fence SME firms against Activist Shareholders.